In February NECROPHOBIC released their strong eighth album „Mark of the Necrogram“ after five years of work. During this time a lot happened in the band. Especially changes of members had an impact since the band’s predecessor „Womb Of Lilithu“. The most prominent of them: Tobias Sidegård, who had to leave the band due to the conviction for domestic violence and was replaced by Anders Strokirk. Strokirk had already been the vocalist of NECROPHOBIC between 1992 and 1994 and can be heard on their debut „The Nocturnal Silence“. We talked with guitarist Sebastian Ramstedt about the line-up changes and of course their latest album.

You have been playing at the recent 70000 Tons Of Metal. Could you actually perform a decent black metal gig there, when everyone around was in a „holiday“ mood?
Yeah! It was a crazy fucking trip. I don’t know about holiday mood. I think it was more of a festival feeling about the whole event. Black Metal gigs are kind of a paradox anyway. I mean the music is not made for entertainment purposes. But live gigs more or less are. People mostly go to gigs to get drunk, headbang and get laid. The little percentage going there rather for the ritual reasons would not fill a concert hall or even a club. So, as a performer you will have to decide if you’re up for the job or not. Well, Darkthrone are not, while Dimmu Borgir sure are. I guess we are somewhere in between.

After 20 years your original singer Anders Strokirk has returned to the band. Was this the natural decision after Tobias left the band? Or did you consider other vocalists as well?
Of course you look back to original members when something like this happens. I prefer to have someone in the band who has a history with it. And switching singers is a big deal. Tobias’ voice was important to NECROPHOBIC. But during all these years I’ve been in the band, people have always mentioned “Nocturnal Silence” as one of the greatest albums (or the greatest) that we have done and not one person has given us negative criticism about Anders’ vocal duties there. So, it was a very natural decision to ask him first before searching for a new guy. 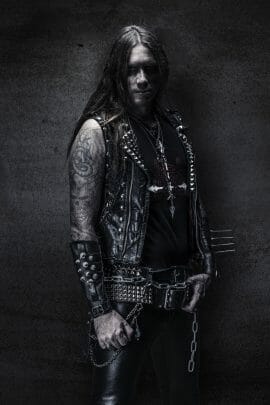 What has changed with Anders returning to the band?
As always when adding or subtracting members to a group, the chemistry and dynamics change. Anders is a very easy person to work with. He looks for the best for the band and does not only fight to get his own ideas through. He is a great performer and I think the quality of his appearance and voice live is very consistently at a high level. In the past, the band could be great or not so great, depending on the shape of the members in the band. I was not always happy about our shows in the past. But now I am. With Anders up front we focus on bringing this battle ship forward with full force.

What was he doing in the meantime, especially in terms of musical activity?
He was very active in the music business. He had his main band Blackshine who had some success. Even going on tour as the opener for Bruce Dickinson back in the days. Then he made some records with Mykkoriza.

You and Johan have also left and later rejoined the band – how did that come?
We left in 2011 I think while working on the follow-up to “Death to All”. The tensions in the band were strong and we did not communicate well. I really think we all needed a break, actually. Anyway, me and Johan addressed we should take a year or so off to let things cool down. The other members chose to move forward with new guitarists. It really was not the same band. In the fall of 2016 Joakim decided that something had to be done to bring back the true spirit of NECROPHOBIC. At the same time, me and Johan had been talking about the old days and that it would be cool to get back to the band. When Joakim gave us a call it was an easy “YES!”.

How about Joakim? Is he sometimes thinking about secluding himself in the next few years?
Joakim has been the only member who has lasted through the whole NECROPHOBIC career. I don’t think he will ever stop. He is the kind of person that sets goals and never lets down the guard or gets out of focus. I fucking admire him for that. There have been many times in this band when I have almost given up but Joakim has never once uttered the words of “I quit”. It is his vision that makes this band what it is. I know he enjoys his duties as much today as he did back in 1989. He should get a gold watch or something for that, haha! 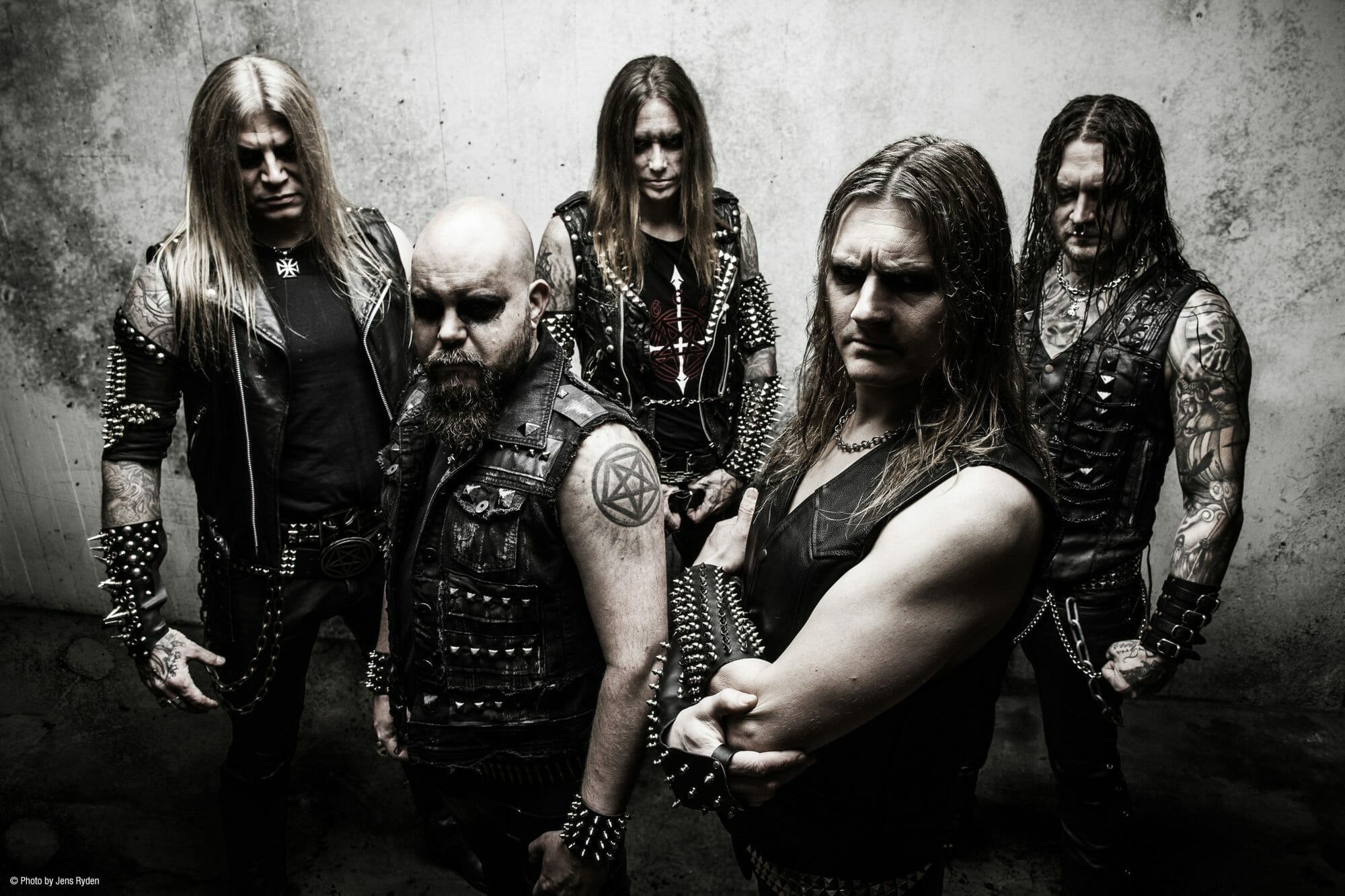 How do you actually progress as a musician? What can still give you inspiration to move forward these days? What are you still looking forward to?
I thrive on learning how to master the guitar. I get up every morning at 04.30 (this is true) to practice or write. Then I have a couple of hours in solitude before the world awakes. It’s like a no end game. I have to level all the time. I don’t play guitar for the purpose of performing or getting my music out to the masses. This is a bi-effect. I need to create to live. It’s in my blood. I get inspired from all kinds of music. Right now, I’m working on mastering some Van Halen stuff. Even if it’s not my favorite kind of music, it helps me developing my skills to play Necrophobic songs better. There is no goal. I hope that one day I will be satisfied with what I can do on the guitar, but right now I’m nowhere near.

You have recently released your new album „Mark Of The Necrogram“. How do you see your new album in comparison to the past ones?
To me this is the best album we have done. There are no parts on it that I would have done differently. I think it perfectly represents what NECROPHOBIC is and should sound like. Past albums have had a lot of great ideas and songs, but I feel in the end the last pieces have been rushed or put together in exhaust. There is more power to this album. And it never loses it. We are actually much stronger and more determined now compared to when we were younger. It’s like you learn how to get the bullshit out and focus on what’s important. 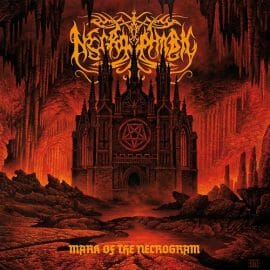 How long did you work on the material of the new album?
I wrote three of the songs back in 2010, just after “Death to All”. Those were put to rest as I left the band. Then all of the other songs where written in a couple of months during summer and fall of 2017. It was intense work. As I told you, getting up every morning to write. So, compared to the previous albums we have put much more hours in to this album but in a shorter time frame.

The album cover is done by Kristian Wåhlin (Necrolord) again, who seems to be the rock star among the cover painters. What made you choose him?
This was an idea that I had just after „Darkside“ was released. I always loved that cover. Just like Iron Maiden in the 80s had covers that led Eddie from one environment to another, I wanted to see what was beyond the blue church isle. There is a red area in the middle of that cover art and we asked Kristian to paint that in detail. This Idea was perfect for this album as it is also a reunion of past members and past days. He was totally up for it and the result is just stunning.

Your lyrics have always been inspired by Satanism. How do you counter people who say those lyrics are hackneyed?
Don’t care. We don’t do anything new. We do old school stuff. The lyrics should reflect your darkest inner self and also fit the music. If people have a problem with that then they are buying the wrong records. I’m sure there are other bands out there doing something they would rather pay for (or take their precious time to download).

Whose idea was it to re-record your first demo “Slow Asphyxiation” and to put it on the “Pesta” EP?
This was an old idea of mine as well. I think it is a brilliant song. It’s a shame that it is only on the first demo. I wanted to bring it back into the light. The “Pesta” EP was a perfect release to put together the oldest and the newest material we had. 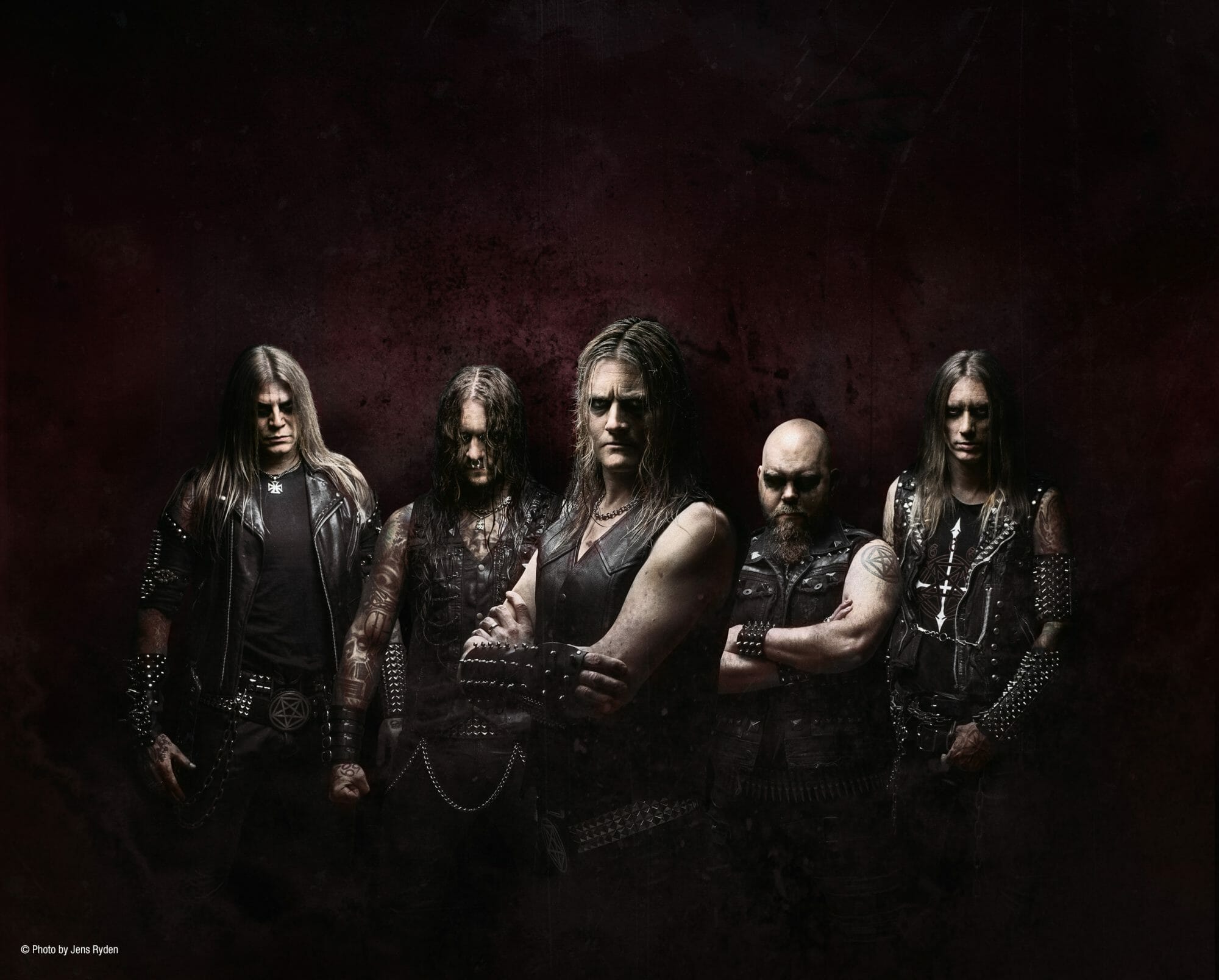 I’d like to end the interview with our traditional Metal1.info brainstorming! What comes to your mind first when you hear these following words?
Mainstream: Boring.
Coffee: Essence of life.
Party.San Festival: Jarne and the best festival in the world.
Loud Music: If it’s too loud, then you’re too old.
Dissection: Gods!

Necrophobic
Dawn Of The Damned
2020