LIVLØS from Denmark are presenting a remarkable label debut with „And Then There Were None“. Their technical, atmospheric melodic death metal of the heavier kind shows enormous potential and is a recommendation for fans of At The Gates, Carcass or The Black Dahlia Murder. In this interview, guitarists Kenneth Breinbjerg and Franz Posch, vocalist Niklas Lykke and drummer Thomas Dannemand talk about the long time between completion and release of the album, constant development and the only true way to drink coffee.

Hello, thank you for taking time to do this how are you. How are you the days?
Kenneth: We are very well, thanks! We just released our album and we are finally allowed to go touring again and playing live crowds. 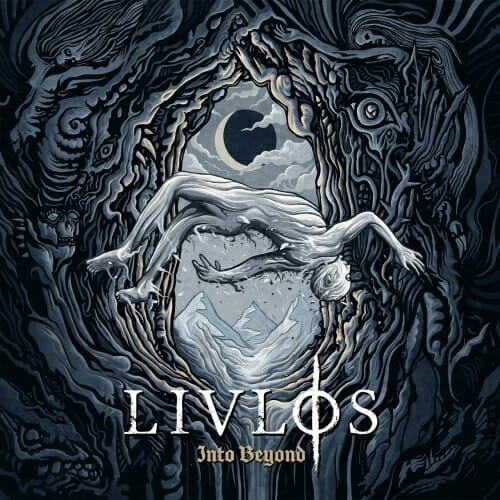 Back in 2018 you released you debut album „Into Beyond“ on your own. What has changed for you since you signed to Napalm Records?
Kenneth: On a funny note, we turned everything up to 11, basically. We took a more professional approach to our music and “music” as a business, and everything related to it.
We set a goal to write it within 7 months and we even booked Jacob Bredahl and his studio in advance to meet that goal. We didn’t rush anything and took our time working through every song, but that goal made us more effective in our songwriting process.

When you signed to Napalm in January you already had “And Then There Were None” ready and done, right? How long have you had to hold the album back and why did it take so long to finally release it?
Kenneth: That’s right, we held onto it for around two years. We wanted to give the album the best chance of reaching a global audience. So we had to be patient and wait for the right moment to come – and the right record label. We were, and are, still very proud of the album, so if no label was going to bite, we would release it ourselves. It was troubling times proving yourself as an upcoming band, but we were able to land a deal with Napalm, and we haven’t looked back since.

How have you developed yourselves as musicians since your debut, what do you do better on your second album?
Kenneth: We are taking a more mature approach to song and riff writing. For the first time we actually made real demos that wasn’t just rehearsals recorded on an iPhone. That alone made a huge difference as we obviously had the chance to listen to the songs again and again and make corrections before doing the real time in the studio.
Franz: With “ATTWN” you’ll hear a band that has improved on all fronts – we are better musicians, showmen and overall artists than before, and that’s the way we wanna continue of course. It’s what we love about our favourite bands and it’s the only way that makes sense to us really. Since we wrote and recorded “ATTWN” over two years ago and especially during the pandemic, we have been writing A LOT of new material and have continued to practice even though shows were not in the calendar. So, we are constantly growing and we personally believe that we can and will keep exceeding ourselves in all aspects of LIVLØS.
Kenneth: And also, of course: Niklas! 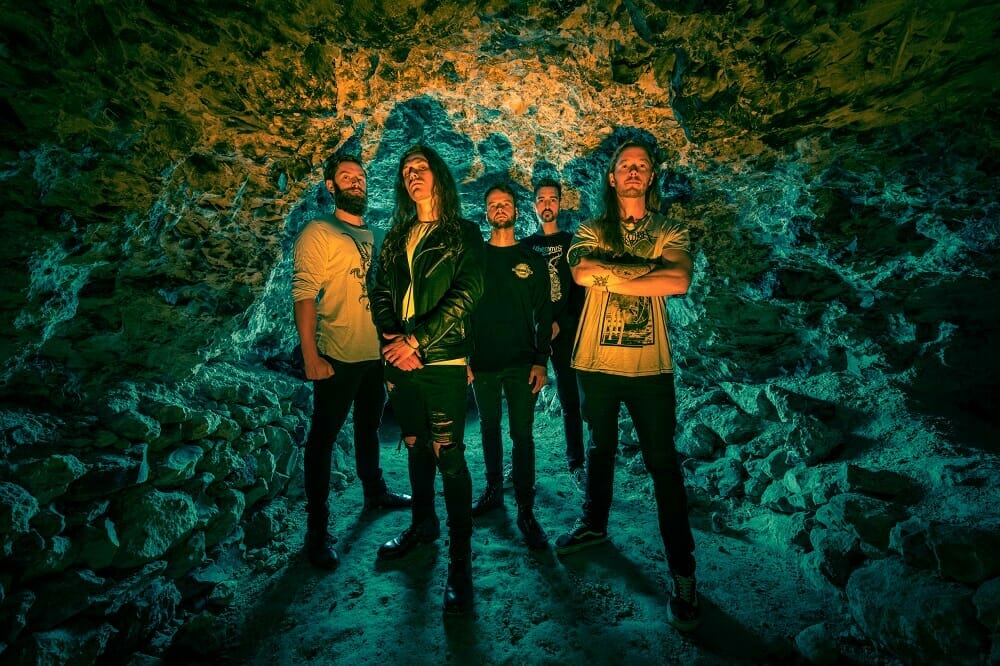 You have a stable line-up since the foundation, only on the vocalist position there was a change from Simon Olsen to Niklas Lykke. To what extent has the change changed and influenced your sound?
Thomas: Our parting with Simon was basically about time and commitment, so we had to let him go. We parted ways on good terms though and remain friends to this day.
First of all, Niklas is a very dynamic vocalist. From his guttural growls to his high-pitched screams, he has added many new exciting layers to our sound and helped further develop it. Second, he is a great storyteller! It became clear to us rather quickly, that Niklas takes a lot of pride in not just his lyrics but also the vocal delivery of them. He works hard and thoroughly and experiments with grand concepts and stories, which has added a cool new dimension to the band. All of which you will get to hear on the new album.

Since a long time has passed since finishing and releasing the album, how satisfied are you with the album and would you want to change anything now?
Kenneth: We are very satisfied with the album. We have been getting a lot of good feedback, now we just want to get out and play it with an audience.

What does the album title “And Then There Were None” refer to?
Franz: The theme of the album is about life and death from different perspectives and the bleak and beautiful aspects of both. One is not inherently good and one is not inherently bad. They exist in this gray area where it’s different for each scenario and to each person.
Both music and lyrics merge these contrasts – melancholy with bliss, hope with despair, and the natural with the unnatural. This album is about the beauty of dying and the horror of living, yet also overcoming the tribulations of everyday life and conquering death. The cover artwork from Mariusz Lewandowski is just awesome and he is a really great artist. How did the collaboration happen and what is the idea behind the artwork?
Kenneth: Thank you! Of course, we already knew about Mariusz’ amazing work, and even before writing the album we had him in mind for our next artwork. He has a great artistic sense, so our idea was just to give him the whole album to listen to, lyrics to read and notes about the songs, and then interpret it in his way. Mariusz replied that he only required that we send a short description of the album theme and some of the lyrics and then he would paint his interpretation of that. So it fit perfectly. And he just hit the nail on the head, a beautiful artwork. Fun fact: Franz, our guitarist, has the original hanging in his studio.

What can you tell me about the lyrics? Are they related or do they all stand on their own?
Thomas: We’ve come to a point in the band where we just write about what we know – stuff from our respective lives. We’ve all had our very difficult times these last 4-5 years which just seemed natural to put into words and add to the music that was taking shape. This has continued to be evident in all of our lyrics – that it’s always grounded in something real.

I think At The Gates are pretty obviously a band that influenced you guys a lot. In my review I also mention The Black Dahlia Murder, Hypocrisy and Kataklysm as possible influences. Are those bands you like and what other bands have inspired your songwriting?
Niklas: We’ve always had the mentality of trying to simply make the music that we ourselves wanted to experience as an audience. However, the sound of Carcass, The Black Dahlia Murder and swedish death metal (Göteborg as well as Stockholm) are probably our biggest jumping-off points, as it combines thrash and death with the possibility of big themes and epic melodies taking place without sounding forced or out of place. We do however have a lot of inspirations from a lot of different bands and genres.

You completely work without clear vocals, synthesizers and other effect gimmicks. Was that a conscious decision from the beginning, does that simply not fit into your sound?
Kenneth: Not a conscious decision, we just flowed in that direction. We are constantly evolving, so who knows what might be on our records in a few years time. But for now, that’s a recipe that we are sticking to.

The album was mixed by Jacob Bredahl. Why did you choose him, why was he the best choice for your sound?
Franz: Jacob has basically made our sound and the “style” that we’ve become. He made our very first EP, our debut, our second upcoming album and everything in between. He’s always been our biggest and most honest critic and obviously knows what he’s talking about. From day one he’s had no assumptions on what kind of band we were and before each record he just sits down and listens to the songs for the upcoming album – and then makes the assessment on what it could become. The last two years we’ve also been so lucky that we’ve been able to rehearse in his studio which just makes the whole process even smoother and more.

You will be going on your first ever Euopean Tour in 2022 with 1914, Konvent and Hiraes. How excited are you to go on tour, especially after the weird months behind us?
Niklas: It’s gonna be great! Especially since we can finally play all the new songs live after waiting for almost two years. We’ve had a small amount of shows sprinkled throughout the pandemic. We had five shows in late 2020 and our last show was in June of this year. It’s all been with a seated audience but that hasn’t been a big problem for us, since we’re always able to fire up the crowd. We can’t wait to finally play for a standing and moshing audience again though! So even though the separation from our audience has been tough, I know a lot of other bands have had it harder than us, with fewer or even no shows during the span of the pandemic. 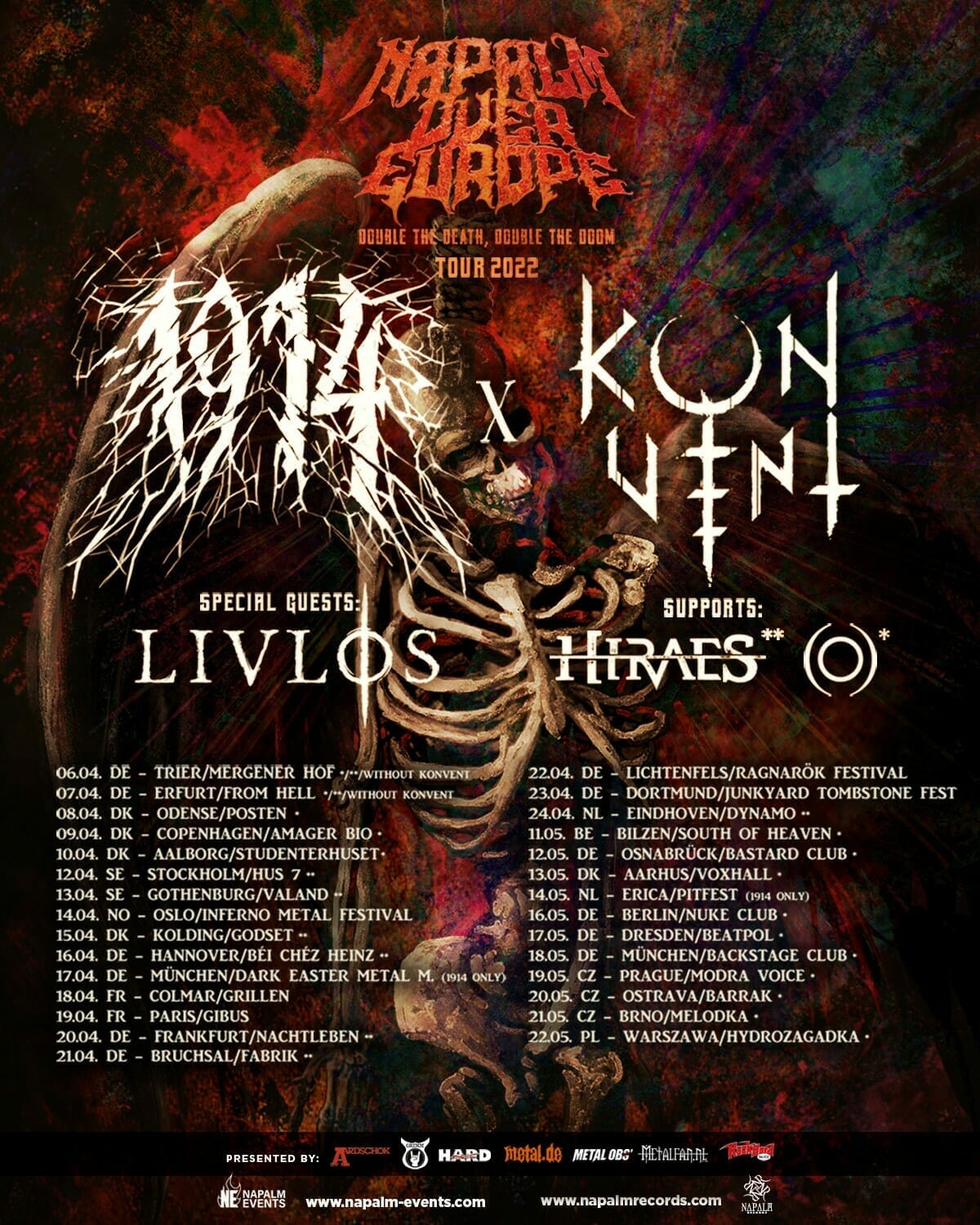 “The Purest Black” – Is there any other way to enjoy your coffee and what’s your favorite coffee? As many other bands do stuff like that: Wouldn’t it be great to have your own coffee bean with that name?
Kenneth: Absolutely, there’s no other way of enjoying your coffee. Dark as the abyss.
We go through unreal quantities of coffee in our rehearsal space – and our coffee makers die of exhaustion. We actually thought of that, or making it into a dark beer. Wouldn’t both of them be great?

Thank you once again for your time! The last words are all yours. Is there anything left you want to tell our readers?
Catch us going through Europe this spring, you won’t regret it!