THE AGONIST have released their first EP after six albums with „Days Before The World Wept“ and can convince with their complex, progressive and dark approach to melodic death metal. Singer and songwriter Vicky Psarakis talks to us in an interview about the EP’s concept story, changing listening habits and why she can just be herself on Twitch.

Hi Vicky, thank you for taking time to do this how are you. How are you the days?
I’m doing well, thank you. This is probably the busiest I’ve ever been in my life, but it’s the right kind of busy and I appreciate it.

You decided to release an EP with “Days Before the World Wept”. What do you like about the EP format and why it was the right move for this release instead of working directly on a new album?
You know, almost every single interview I’ve done has asked me this question. There’s multiple reasons as to why an EP is a better choice during these times. I don’t find them inferior to „full length“ albums in any way. Would you rather have five great songs that the majority of your fans will listen to and appreciate or is it better to put out a 10+ track album, with some potential „fillers“ or songs that get overlooked, because most people don’t listen to albums front to back anymore?

In your opinion, are the differences between physical formats dissolving in times of streaming? Will there be digital singles as single tracks, or EPs, rather than full albums in the future?
That’s already happening, especially with smaller level bands that don’t want to spend the money to print physical copies of their music. Digital format is low risk and let’s face it, most people listen to music that way anyways. I think it’s important to have a physical copy of albums that you love. The romantic part of me feels that strong connection to music. But times are always changing and people adapt to that.

„Days Before The World Wept“ is a conceptual record, where “Remnants In Time” is the first chapter with the final moments of a person’s life. Can you please tell us about the story and the lyrics? What journey is beginning right after this person dies by being strangled?
I played around with the idea of an afterlife in this EP. The story begins at the very end of our character’s life and goes through various chapters before being brought back into this world. It’s clearly a fictional tale, as I can’t say I’ve experienced anything like this myself. (laughs) However, I always include strong doses of reality and things people can relate to in my lyrics. You don’t necessarily need to go through the same journey as someone to understand what they’re going through. It’s important for me to create a piece of art where people can feel something strong while listening to it.

How is the cover artwork related to the songs and the story? Do we see the dying protagonist here?
The cover art is fully inspired and executed by the artist Giannis Nakos from Remedy Art Design. I’ve known Giannis for over ten years now and for whatever reason we hadn’t worked with him till this EP. He’s a very creative individual that loves to build his own vision based on the band’s sound and lyrics. We shared our stuff with him and this is what he came up with. And we loved it. It’s my favorite artwork that THE AGONIST has ever had.

In my opinion THE AGONIST gets darker, more progressive, and cinematic with every release. The cinematographic style is shown on the EP strengthened by spoken passages and some soundtrack characteristics. Is it an intentional evolution of your sound to become darker and more complex, how do you see your evolution?
I think our evolution is natural, yet intentional. The band was a bit undecided on what direction they wanted to head towards when I first joined, but that became more and more clear as the years go by. THE AGONIST sounds its best when it’s succumbed by darkness, intensity and is able to take you from the softest to heaviest dynamics within the same song.

The music video for “Remnants In Time” turned out to be awesome, especially your “evil look” is outstanding. How was it to play this role and how long did it took to finish the whole make up?
Thank you! The demon look was my favorite part of the video! We worked with an amazing Special FX Makeup artist, Mary Jane Khalife, and she completely nailed it. I think it only took her about two hours for that look. Total pro!

Regarding the music video you said you’re a big fan of horror and science fiction. Which movies, series or books from these genres have you enjoyed most recently?
It’s hard to think of recent movies or series to be honest, as I can’t say I’ve had that much time for them. (laughs) The last most recent series that I finished watching in that realm was probably “Supernatural”. A bit on the comedy side, but for a 15 season show, I must say they did a great job with it.

You stream a lot on Twitch. Why is this such a good platform for you and how important is it for you to be in direct contact with the fans?
I love Twitch! I’ve only been doing it for about nine months now, but it’s by far my favorite social media platform, for many different reasons. It’s all real-time, so you can’t take back or edit anything, which means people just end up seeing the real you. The perfectionist in me tends to overthink and overanalyze every single thing, so it’s great to be somewhere where I can just be myself. (laughs)
From a financial standpoint I think it’s pretty fair to creators, also. It’s awesome that people can watch you for free and then choose to subscribe or donate if they’re able to. Whereas with other subscription based platforms, users are required to sign up and pay before they even know what they’re getting into. So I think Twitch is a lot more accessible and helps you grow your audience much faster than any other platform. 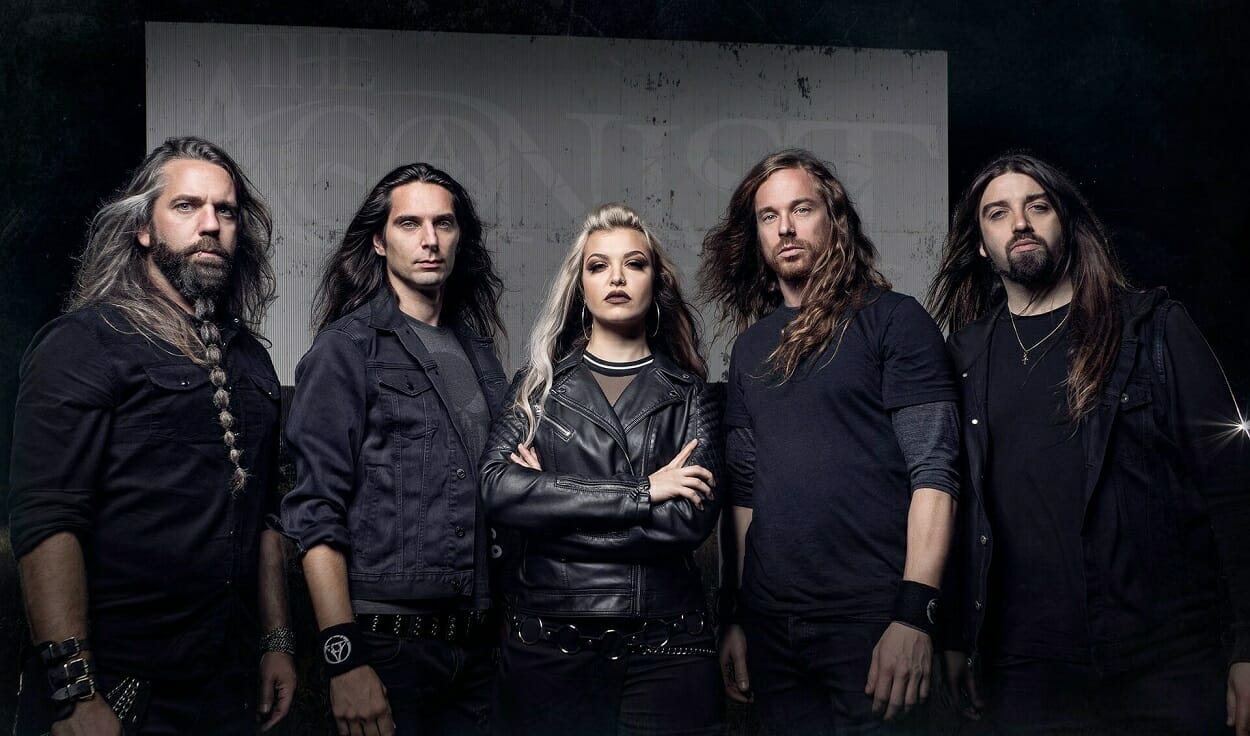 Let’s conclude with our traditional brainstorming. What comes to your mind first when you read the following words?
Current favorite album: Sleep Token – “This Place Will Become Your Tomb” from new releases.
Coffee or tea: Coffee.
Dogs: Ghost & Oreo – my dogs!
Nature: Walk.
Star Wars: Lightsabers.
Something that makes every bad day better: Hugs.
THE AGONIST in 10 years: Creating.

Thank you once again for your time! The last words are all yours. Is there anything left you want to tell our readers?
As always just a huge thank you! V-Squad, you know who you are, thank you for making the last year in my life all that much better!

The Agonist
Days Before The World Wept
2021

The Agonist
Eye Of Providence
2015