14 studio albums in 32 years is a résumé that deserves respect. But UNLEASHED convince not only with quantity and longevity, but also with quality and authenticity – a fact the Swedish death metal veterans prove again with their latest album „No Sign Of Life“. Singer and bassist Johnny Hedlund tells us what the new studio output is about, what it takes to have lasting success as a band, why drawing parallels between our present-day reality and the band cosmos revolving around fiction and mythology is rather far-fetched, and much more.

Hello, thank you for taking the time to do this interview! Your 14th full-length “No Sign of Life” is about to be released, how are you doing these days?
Hi! Very good, thank you! Things are really good and we are looking forward to hearing what people think of the new album, and of course to play live very soon.

How does it feel to have a new album waiting in the wings after the better part of the last two years, which has been tough especially for artists, and how satisfied are you with it now, a while after the production?
It feels absolutely fantastic.The production went very well and we hope this is the best one to date. But then, we shall wait and see what our warriors out there say about it, of course. It’s been far too long and hopefully things get back to normal now so we can do the shows we planned and so on.

The production still fell into the time of the pandemic. What was different for the band during the recording, and were there circumstances that limited you?
Actually not much at all. I mean, we send files digitally back and forth both for the music and lyrics anyhow, so it really didn’t matter too much. The sad part was all the cancelled shows but that was the same for everyone, so no need to feel sorry for ourselves there. We look forward to the future now, that’s the right way to go. 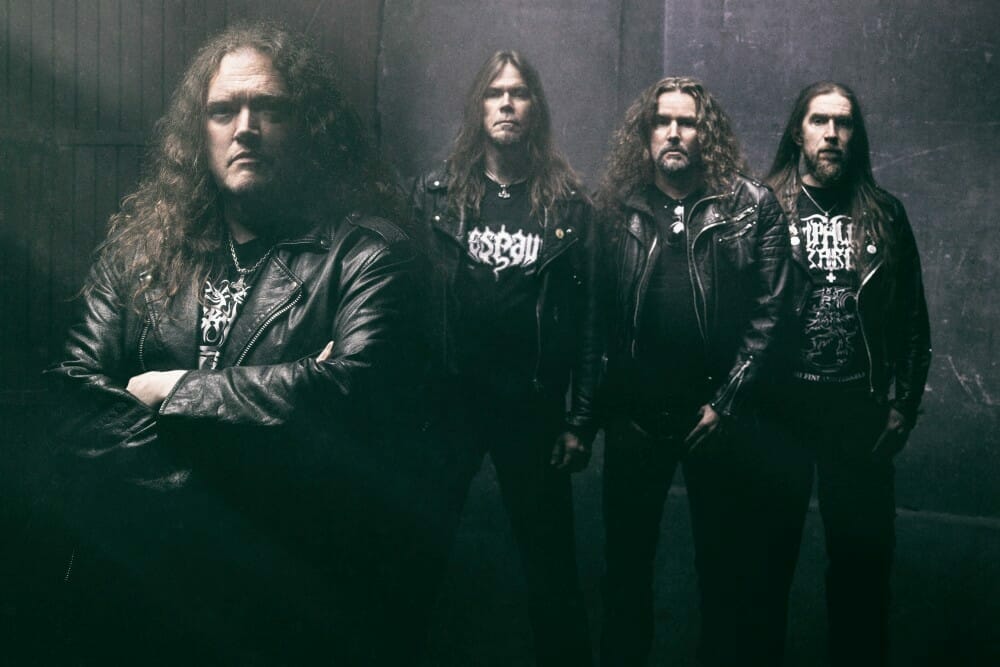 As Swedish death metal veterans, you guys are a band that has found its distinctive sound and style a long time ago. So in your view, what makes the current album more than just another new UNLEASHED album, what is different to the last couple of full lengths, what did you maybe approach differently?
Well, that is exactly that. It IS another new UNLEASHED album. It is supposed to sound a bit like it normally does but with some new touch to it, perhaps. We don’t change by the wind and we always keep to our roots. Although it is still important for us to get inspired enough, so that the album sounds fresh. I’d say that’s it really.

When reading the album title, I can’t help but think of the empty streets and the deserted public places all over the world during the lockdown(s). Is there a connection or do I suffer from pandemic tunnel vision, what did you have in mind when coming up with the title?
This album cover is due to the storyline we have been using for the past five consecutive albums now. We have drawn inspiration from a book that me and a friend wrote many years ago called “The World Of Odalheim” and that we never had the time to finish. The chapters were made into songs in UNLEASHED instead and so here we are in that storyline. The Midgard Warriors fight for their way of life against the armies of White Christ. This album has its focus and events in the Sinai desert, where the Midgard Warriors keep hunting the armies of White Christ into. As they have done so for many weeks, this is what they find in the hot, empty desert of Sinai – no sign of life. 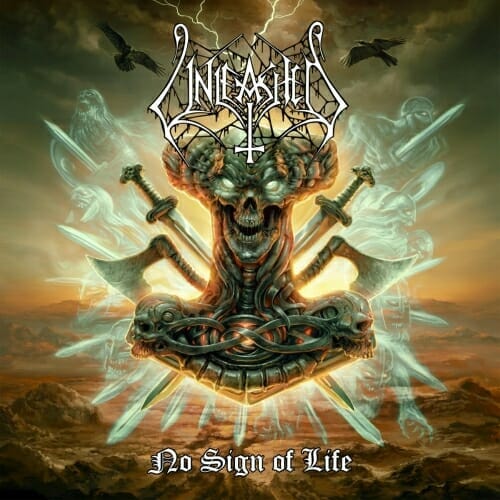 What exactly do we see on the album cover?
The cover art work is meant to capture the situation in the last battle in the Sinai desert between the Midgard Warriors and the armies of White Christ. You see the desert, mountains and you also see Odins Ravens reporting to his master (like the previous album because they are of course connected), and you have the Thor’s Hammer always present.

Usually, and now again, you release a new album after two to three years (aside from the even more productive period in the early 90’s and the one time between 1997 and 2002 when it took you a bit longer). A lot of bands can’t keep up this level in the fourth decade of their career. What is your recipe for success to maintain your productivity and creativity at such a constant and high level?
There are a few things that I think need to be in place. First of all, you have to be very good friends in the band. Second, you all need to help out with things so that it doesn’t become a one man show. And, you need to agree on what to do and also, what NOT to do. Especially when it comes to what to play, and what NOT to play. It also helps out a lot if someone in the band is good with Finance. I took my degree in Finance in that time frame between 1999 to 2001. A really good time for a break.

What do you think adds to the longevity of the band and the current line-up (as opposed to, say, the other big Swedish OSDM bands, whose careers are marked by split-ups, ugly personal quarrels, or occasional line-up changes)?
Well, I won’t speculate in that because I really don’t know what differs us from them when it comes to split-ups etc. But like stated in the question above, these things are vital for long-lasting relationships in my opinion. Although I really have no idea how it works in the other Swedish bands. 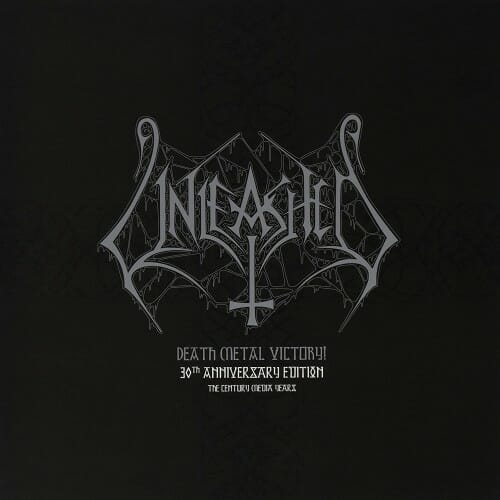 In 2019, the year of your 30th anniversary, the first seven UNLEASHED albums were re-released in an anniversary edition vinyl boxed set. Was the band involved in this in any way, or was this just a thing done by your former label Century Media, which had originally released these albums?
We have a real good cooperation with Century Media these days and we were happy to work together with them on this little project. And it came out great I think.

You played a 30th anniversary show in Stockholm in the beginning of the following year. What do milestone anniversaries such as this one mean to you as a band?
Well, we are pretty bad at launching release parties so I think this was a very nice thing to do. It also was nice to see so many of our friends at this show. It was a real [opportunity] to bang heads together at home so to speak, and have some serious number of beers with them after the show, too.

On Midsommar, you regularly post messages via the UNLEASHED Instagram account, praising Mother Nature and commenting that “we must stand up strong for those who come after us, for they are the ones to inherit the earth” or “the land we walk also belong[s] to those who come after us, and they will be our judges”. Against this backdrop (the Glasgow Climate Change Conference is taking place at the moment, by the way), what are your thoughts on the climate movement led by “those who come after us”, including your fellow countrywoman Greta Thunberg? In what ways must we, in what ways do you “stand up strong” for them?
My wording doesn’t have anything to do with any climate conference or Greta. That isn’t what I am targeting. The climate isn’t something I am too interested in, to be honest. Praising Mother Nature seems pretty fair though, we live in her domain and I don’t think there is any place better than that. I am trying to give some courage to the next generation of warriors. That is my task. Or at least one of them, I should say.

Let’s stay with the younger generations, but go back to metal: There are many new, hungry bands out there who carry the flag of old school death metal. What do you think of this development, and are you interested in younger bands or do you prefer to stick with what you already know?
I urge all younger metal heads to create new metal. Anything else would be absolutely suicide. If metal is to survive, new music must be created, new boys and girls must create this music and find their way of presenting it. This is absolutely crucial for our common future.

Besides the Meh Suff, the Rockharz and some other festivals postponed to next year, is there a chance the German-speaking audience will be able to see you on stage in the foreseeable future in addition to the shows mentioned above?
There are more to come also in Germany as well as other German-speaking countries. Check into www.unleashed.se from time to time or join the battalion on the same website to get info fast. The first show after the pandemic is in the Netherlands at the Eindhoven Metal Meeting on the 10th of December.

I’m aware you don’t own a crystal ball, but what lasting impact do you think the pandemic will have on the scene? Will everything be back to normal at some point in the future, or will it be more like “nothing will ever be the same”?
I think Covid is here to stay regardless of whether you are vaccined or not. Only it will get weaker and weaker by the years. And perhaps just like a normal flu after a while. And perhaps there will also be a vaccine that is tested properly on the market soon. I really hope so. [Editor’s Note: The COVID-19 vaccines used in Europe have indeed been tested thoroughly and can be considered safe according to the standards of the European Medicines Agency (EMA) – opinions expressed by artists in interviews do not necessarily reflect the opinions of this magazine.]

Okay, we’ve reached the end of the interview! Please let us conclude with a short brainstorming – what do you think of first when reading the following terms:
Swedish beer: Not as good as German beer.
Your favorite death metal album: Morbid Angel – Altars Of Madness
Tradition: Midvinterblot.
Your favorite non-metal album: Mike Sanchez – Blue Boy
Magic: The new Eclipse album.
UNLEASHED in ten years: Just like now.

Again, thank you very much for your time! If there’s anything you would like to add, the last words are yours:
Thanks for this interview! Hail Odin!

Unleashed
The Hunt For White Christ
2018

All Are To Return
AATR II
Industrial / Industrial Metal