With their third album „Arkivet“ the Swedish melodic black metallers WORMWOOD have created the musical testament of an earth devastated by humanity. On the occasion of the release of the record, which was postponed due to the pandemic, we asked frontman Nine a couple of questions. In our interview, the singer explains why the climate crisis is not a controversial issue at all in his eyes, for what reason he refrains from offering solutions in his lyrics, and why „Arkivet“ should not be limited to the topic of environmental destruction from his point of view. 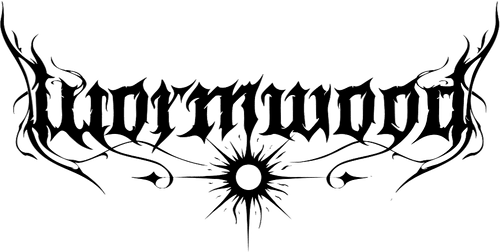 COVID-19 has been hard on a lot of people, especially in the music industry, but also in private aspects of life until now. How have you coped with the situation so far?
To be honest, personally I haven’t really suffered from it. For good or bad Sweden have been pretty laxed with its restrictions compared to other countries, so I’ve been working my day job as usual. Sure, there interactions have been few and far apart during some time but that wasn’t all that bad. Time froze almost in a sense also, and that gave me more time to read and watch stuff, so I shouldn’t complain all that much.
For the band it just gave us ample time to write and record our new album.

The title of your new album „Arkivet“, according to the description on Bandcamp, refers to a document in which you tell relatives your last wishes after your passing, for example for the funeral. Who is the message you have created with „Arkivet“ aimed at?
It’s the Earth’s ‚Arkivet‘. The last will from our silent protector. It’s unknown what she wants the will to be, but what’s certain is that we’ve destroyed so many things and we’ve given up the right to coexist with Earth. So it’s a homage to the end of time while painting a poetic landscape of the destruction we’ve caused. 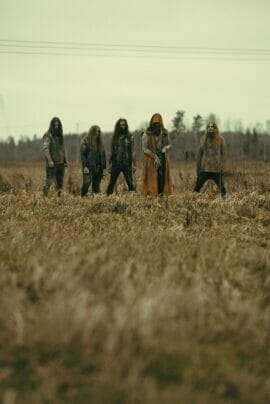 You had Mikael Strömberg write a book accompanying the album. How did you come up with the idea of building a larger narrative with his help?
We have for some time talked within the band that we wanted to have a book accompanied by a release, but never knew what the book should be about. When we came up with the concept of the album it felt like a no-brainer to have a short novel about one song, so whoever wants to can take a deeper dive into our reality-induced dystopia.
I first wrote a lyric to the song „The Archive“ but for whatever reasons it lacked something and we weren’t 100% happy with it. That was when we contacted Mikael and told him about our vision, especially for this particular song. He really liked the idea and started to write. When the first draft was sent to us I re-wrote „The Archive“ to fit his vision but still added my twist and meaning behind it. In the end, it worked out really well.

Why did you choose him in particular for this task?
He was a local from a small town north of Stockholm called Norrtälje. He has a name within the horror genre and it felt like a good fit to use him. Besides, he liked metal.

How did you work together? Did you give him certain guidelines for the story’s content?
As I stated before, we told him about the concept about the album and the song „The Archive“, but we let him go interpret it in whatever way he chose. When the first draft came I can’t remember there being anything we wanted him to change, he just nailed it straight away.

On „Arkivet“, you address, among other things, the climate crisis – a pressing issue, but also a very controversial one. What prompted you to sing about this problem in addition to stories of loneliness and loss?
For us the climate crisis has never been controversial, because it’s happening. It’s not our problem what people choose to believe, the facts are clear and the science is solid. We just tell the listener what is going on. We are not a political band and this is not a political issue any more. It’s a fact of life and then people chose how to handle that fact.
Loneliness and loss is something everyone will experience sometime in their life. It’s something I like to write about because it can be the thing that hurts the most. The loss of a loved one, the irreversible sensation of the deepest despair is just an endless pool of inspiration.

Nature romanticism is a popular topic in black metal, but almost no band sings about the threat to the environment posed by the climate crisis. Why do you think that is?
I don’t see WORMWOOD as a band that sings about climate change and proclaim that we should stop using plastic and chain ourselves around trees in the amazon.
The earth is slowly dying, and it’s almost beautiful to watch. We are insignificant apes that overstayed our welcome. So besides loss and loneliness, this album is about the destructive force called man and our inability to make changes. Whatever changes comes it’s too late. So enjoy the end, drink booze, pour out some oil in the ocean and watch it all collapse. 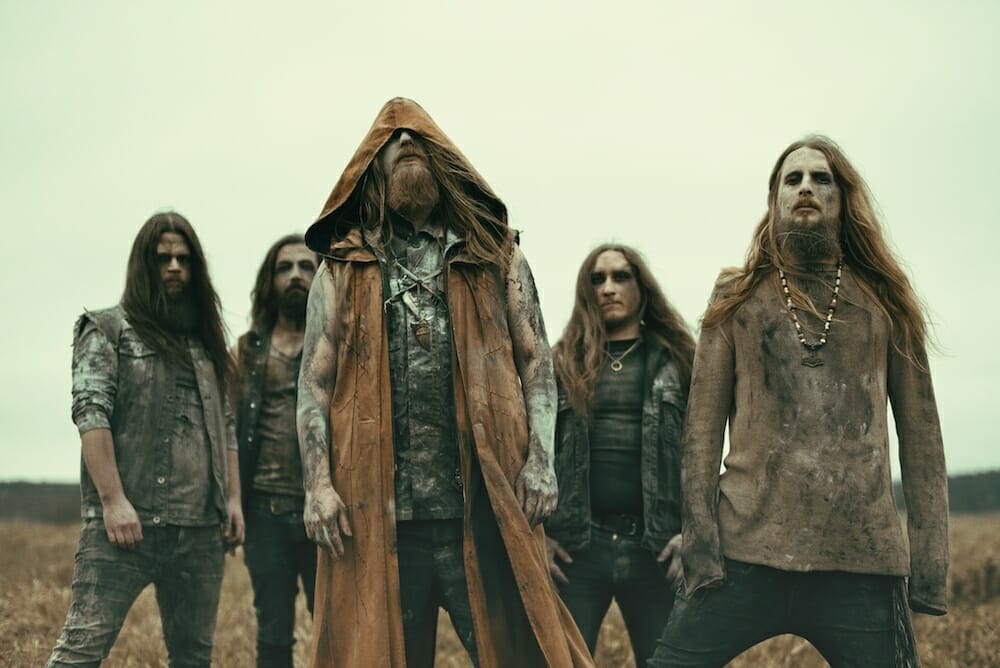 You came forth a music video for the track „The Gentle Touch Of Humanity“ before the release of the record. In the announcement you noted that this would surely divide your fanbase. Why?
We were quite certain that the almost two and a half minute long intermezzo with the news clips would put people off. It would destroy the flow of the song, and I guess in some sense it does. If people skip that part they are proving us right. Because that’s what people do when they are watching the news or reading about it. They just skip it because it’s unpleasant and there is more important thing for them to do and read about.
That being said, more people than we anticipated liked it and they don’t skip it. Didn’t see that coming. It was actually supposed to be longer, closer to four minutes, that wouldn’t have made anyone happy.

Do you think that with the record you can reach people who have been indifferent or ignorant to the topic of environmental protection so far?
We don’t care about people’s political beliefs. If someone chooses to not listen to our record because we are singing about how man is destroying the Earth, then it’s pretty pathetic.
Bands singing about war, that works! Singing about dark evil forces, that’s cool! Singing about Vikings, that’s metal! Singing about the planet dying due to human activity, no that’s some Greenpeace shit, can’t listen to that! Sure.

Lyrically, „Arkivet“ gives the impression that we can only lose the fight against the climate crisis at this point. Doesn’t this pessimism play right into the hands of those who don’t want to change anything about the status quo?
To be fair, there is one song there are a couple of news clips about the climate crisis and I think that shouldn’t be the main takeaway from the album. Most of the songs is about the planet killing humanity and reclaiming what was once only hers.
But sure, this album is the most pessimistic and nihilistic of the three we have released. The damage is irreversible and we can’t do anything about it. If people think that using fewer plastic straws and only eating apples that have fallen from the trees will help, sure, go head. 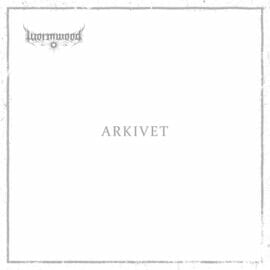 Visually, „Arkivet“ stands out clearly from your other albums with its simple, white cover image. What was your intention behind it?
It’s a reference to the white paper you need to write on when describing your own funeral, your last will. That’s a pretty sad, boring, bureaucratic piece of paper and that was what we were going for. We don’t want the artwork for the album to overshadow the bleak content inside.

The topics, which you sing about, are just as varied as your songs sound. What do you usually start out first with – the music or the lyrics?
It’s different from song to song. Sometimes I hear a new melody or a whole song T. Rydsheim have made and it evokes a certain feeling within me, sometimes I have written something with no music in mind and T. Rydsheim gets a feeling and we start that way. I usually just get a feeling wherever I am and then I write it down. Most of the time I write the whole song in one go because, at least for me, if I write something and then wait a day or a week to continue to write it, I have lost that initial feeling I had.

Musically, you seem to have largely kept your previous style on the album: melodic black metal with subtle rock and folk influences. Would you say that you have found and perfected your own sound?
It is sure perfect for this release, we don’t know how the fourth will sound like. Maybe it’s even more atmospheric, maybe it will have an eight hour long didgeridoo solo, we’ll see.
But in general, yeah, I think this is a sound that suits us quite well. We know the base of the sound yet we have no real rules to follow. It gives us much freedom to experiment.

Nevertheless, is there a musical aspect on „Arkivet“ that you think will surprise your fans?
I guess the surprise might be that we have created something which feels even more cinematic than the previous one. A deeper kind of melancholy and beauty intertwined with the destruction of the Earth. The last moment of our existence has never been so beautiful, ey?

Big surprises are rarely found in black metal these days. Do you think that this kind of music can and should still shock people today?
I am sure it will. Everyone and their uncles have different takes and rules of what black metal is, what extreme music should be. So there will be people that call us this and that, and we’re not playing black metal, we’re playing something else, and that is completely fine with us. I can see arguments for us being black and not black at the same time. In the end I don’t care what we play, people can judge the music by listening to it.

What are your next plans for WORMWOOD?
Gigs and creating music.

On Metal1.info we usually end interviews with a short brainstorming. What do you think about the following keywords?
Hope: There is none.
Short stories: Read Isaac Asimov’s short story called „The Last Question“.
Individual responsibility: That’s good?
Musical experimentation: Not for every band but for us it’s important.
Remembrance: Remember the past because the future doesn’t seem too good.
Your current favorite album: „Hädanefter“ by Jordfäst.

Now we’ve come to the end. Would you like to say a few last words to the readers?
If you’ve come this far, bravo! I hope you’ll enjoy our album „Arkivet“. Read the lyrics and write to us what you think. Good or bad.