In this part of the series we talk to Tor Oddmund Suhrke, guitarist of  LEPROUS.

When did you start playing guitar?
I started playing guitar in early 2001, when I was 15, after finding an acoustic nylon guitar in the attic, together with a guitar lesson book by the Norwegian artist Lillebjørn Nilsen. For the next half a year I continued learning songs by using online tabs, and around summer time I bought my first electric guitar. When school started again in August, me and my childhood friend Einar Solberg started LEPROUS with some other friends, and in 2021 Einar and me can actually celebrate 20 years together in Leprous.

What made you want to learn guitar back then?
I tried learning classic guitar in 2nd school grade, but playing with notes and not being allowed to play any chords was too boring for an impatient 7-8 year old kid, so I quit and wasn’t that interested in playing music until we started learning a bit more advanced instruments again in 8th grade. I remember in the first class we were taught three chords to play a blues song, and since I managed to play it pretty quickly, that’s when I realized that playing an instrument didn’t have to be as advanced as I was taught in the past. Then, when I found that old guitar again in the attic, I had a lot of energy built up to really try learning it this time around.

Have you already learned (had to learn) another instrument before?
In the Norwegian school system we’re always taught music to some extent, and in our case it was mostly basic flutes (recorder), or some kind of rhythm instrument like wooden sticks or triangle, so it wasn’t really something that caught my interest. My three sisters were always playing instruments like piano or violin, but after losing my interest because of the attempt on classic guitar I didn’t really try anything else until the day I suddenly got hooked on playing the guitar I found. For me it was very important to have a self-interest in learning the instrument, and not having to do it because of other people wanting me to. 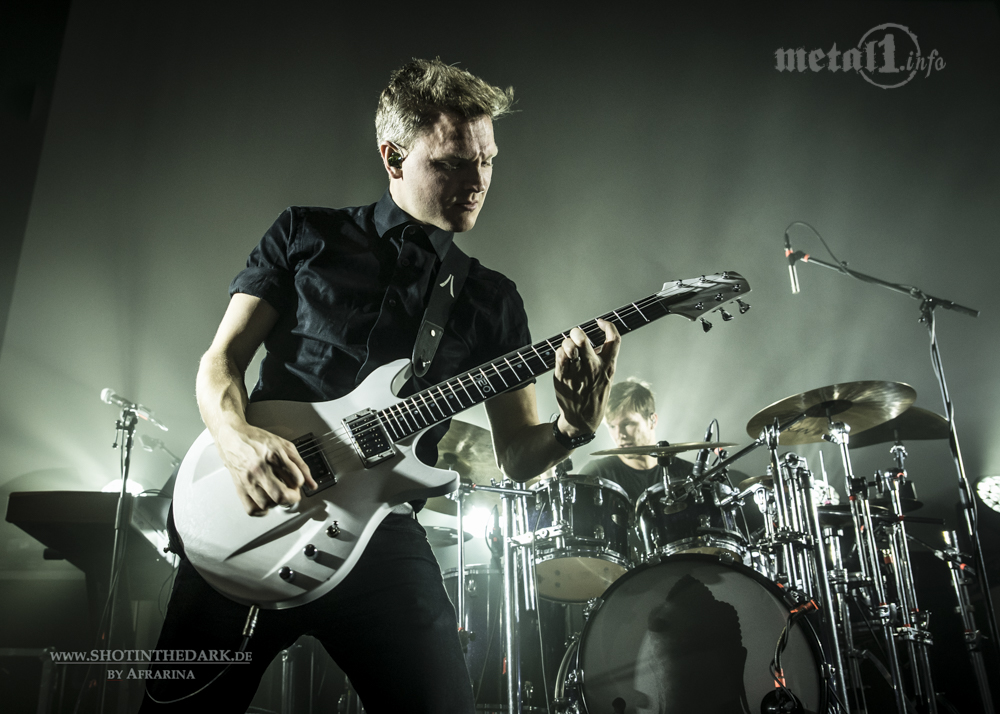 Do you remember which model was your first guitar?
My first guitar was a blue Peavey Axcelerator with white pick guard. I bought it together with a Trace Elliot combo amp after playing guitar for around six months, and I still have them both. I remember very well the day we drove to the music store, and after getting it I was completely hooked.

How many guitars do you own?
My main guitars that I use these days are my Aristides 020 (6-string), Aristides 080s (8-string) and Babicz Identity (acoustic). As back-ups I have an extra Aristides 080s, and the guitars I used before changing to Aristides; a PRS Custom 22 and a PRS McCarty 58. I have a tendency to get rather connected to things I own, so I don’t have a habit of re-selling the instruments I’ve had, although I’m considering letting some of the oldest ones go soon. This means, I still have the first guitars I ever owned as well, which is the Peavey Axcelerator, an Epiphone Les Paul Gothic, a Washburn WG-587 (7-string), and an Ibanez RG-2228 (8-string).

Do the instruments have different uses for you, so do you have different ones for different occasions, like studio, live gigs and holidays?
In my main rig the three different guitars have obvious roles. The Aristides 020 is my main guitar, and I use that unless I need to go lower than a C#, which I sometimes do, in which case I go for the 080s, which is the best 8-string guitar I’ve ever played, and I use both of these at home, on live shows and in the studio.

The Babicz Identity was left unused for eight years since the release of Leprous’ “Bilateral” album in 2011 until we released “Pitfalls” in 2019, since I didn’t use acoustic guitars in that period, but now it’s back and it works very well in a live setting due to its built-in iBeam mixing system. For recording of acoustic guitars I’ve borrowed a couple of different guitars in the studio, depending on which sound I needed. 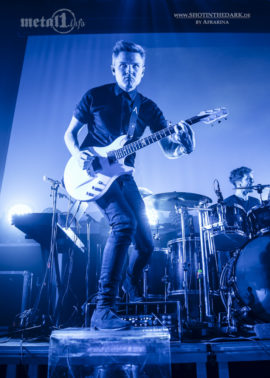 What do you attach particular importance to, from a technical point of view, what criteria must an instrument meet for you to be satisfied with it?
The most important aspect is of course the sound of the guitar, especially in the studio. Sadly, sometimes the appearance of the guitar, which is always the first thing you notice about it, can also make a subconscious impact on your impression of the sound, but I try not to let that color me. For live use I have experienced that some guitars, which worked very well in the quiet and isolated studio setting, doesn’t work that well since there is a lot more noise and electrical currents affecting the pick-ups, and that might eliminate some great sounding guitars from being able to use on stage. The playability of a guitar is of course also an aspect, but I think I’m fairly good at adjusting to different set-ups, so that wouldn’t affect my choice in a significant way. My Aristides guitars luckily work very well both in the studio and on stage, and that makes it a lot easier to get the same sound in studio and live.

You often hear about musicians who seem to have a special connection to their instrument. Do you feel the same way? Do you have a favorite instrument?
If I would have to choose one instrument it would have to be my Aristides 020, since it’s my go-to instrument if I’m just playing at home, it looks clean, classic and cool, and is very easy to play. The only downside is that this guitar isn’t really mine, as I’m actually borrowing it from the company, but I’m not really sure if I’ll be able to part ways with it at any point.

Did you make special modifications to it, or is it a custom model anyway? Can you tell us the technical details here?
That specific guitar is one of the first prototypes of the Aristides 020, and the only one with a stainless steel truss rod. Although all Aristides guitars are custom built, I wasn’t a part of customizing it since it was an early model made for the company, but I wouldn’t change anything with the set-up. Aristides guitars are not made from wood, but from a material called Arium, which is a material optimized for giving a great sustain and acoustics. They are molded in one-piece body/neck constructions, and my 020 is in a white marble finish, has a black richlite fingerboard and chrome hardware with a wraparound bridge. It has passive Bare Knuckle humbucker pick-ups, with coil split selection on the volume knob, and I’m a big fan of the single coil selection. As my next guitar I’m thinking of an Aristides T/O, with a single coil neck pick/up and a humbucker bridge pick-up with coil split.

Is there a model, such as the instrument of a great role model, that you would like to play one day?
Good question (laughs). I feel like I could cross a thing of my bucket list when I could try Devin Townsend’s gigantic flying-V guitar with built-in smoke machine.

Which type of guitar picks do you use – and why this type?
I use custom made guitar picks based on the Jazz III 1.14 mm, and I’m currently considering reducing the thickness to 1.00 mm. I guess the reason for this choice is a bit random, as I just bought a batch of them at some point, and now I’m so used to it, so I’m not really looking for something else. That being said, I don’t have a problem adapting to another kind of pick if I for instance have to borrow from someone else or try some different ones in the studio. 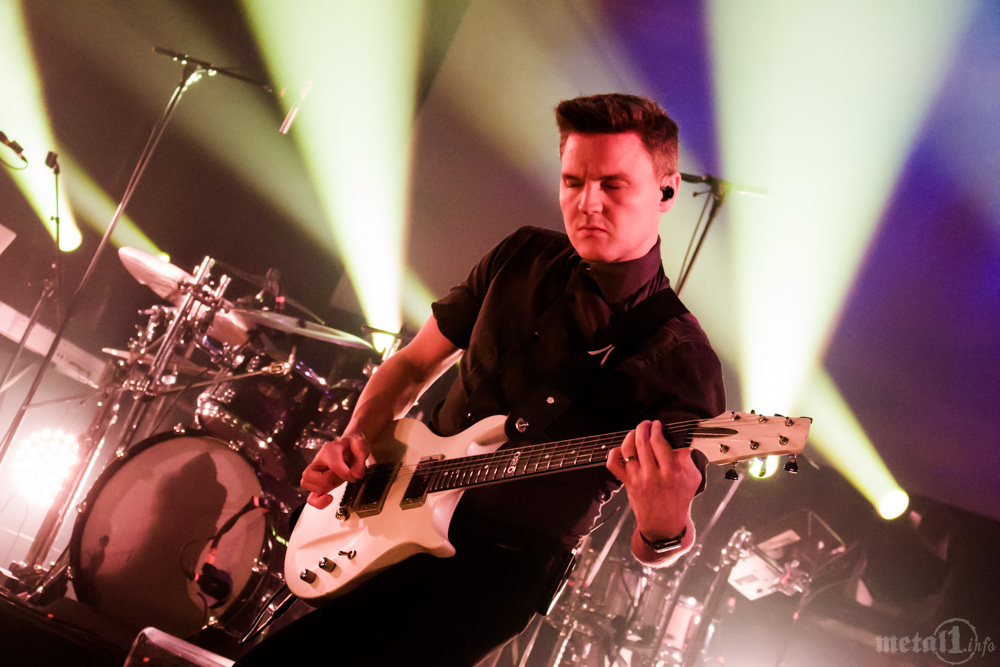 Amps are often leased for tours – is that okay with you or do you have your own amp with you? Which model do you play?
The last couple of years I’ve been using my own Kemper Profiler on tour, which is very nice for the consistency in the sound and how to operate it. Before that I’ve been using both Blackstar amps and Fender Twin, but as you mentioned you often have to lease them on tour and the state of the specific amp can vary a lot, so the consistency of the Kemper is very practical, and it also sounds awesome. The last tour we used a proper amp live, I used a Fender Twin in combination with a Kemper, but during the tour our sound guy Chris Edrich ended up only using the Kemper for the sound out in the PA, so then we realized that we didn’t really needed the other amp anymore.

Besides the instrument and the amplifier, sound effects play an important role in the sound. Do you rely on single pedal mines, a multi-effect board or a combination?
Through the years I’ve been using several different multi/effect boards like. In the beginning I started with a ZOOM GFX-707, then a Boss GT-6 and then a POD XT live before starting to develope my own fx-board in combination with a tube amp when we started playing more professionally with Leprous. The last setup I used before converting to using effects integrated in the Kemper Profiler, was rather simple and consisted of a Strymon Big Sky, a Mad Professor Sweet Honey Overdrive, a One Control Strawberry Red Overdrive and a BOSS OC-3 Super Octave. 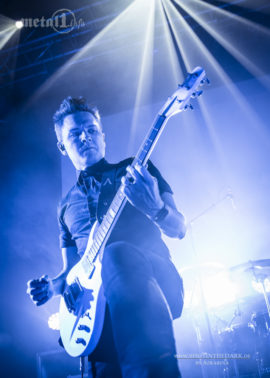 Mind game: You are only allowed to take one single (!) effect on stage – which one do you choose? Which effect pedal makes up your sound?
That’s easy, I’ll just bring my Kemper! (laughs)

Do you have an effect that you use in a completely different way than originally intended, or that you have perhaps even (re)built yourself?
On the song “I Lose Hope” from our previous album “Pitfalls” I used a slicer in studio, but I haven’t found anything that works exactly like that on the Kemper, so instead we send the signal through Ableton Live where we’ve programmed a Tremolo in a way that it sounds like a slicer. It’s a bit complicated, but it works very well!

Is your effect board „ready“ or in constant change?
I’m always open to develop my sound, and I’m often adjusting the sound on specific parts throughout a tour based on experiences during our live shows. One of the advantages of having a more digital approach to the sound source, is that upgrades and different effects or amps are very accessible even on the road. That being said I definitely still enjoy analog effects, and I’m still like a kid in a candy shop when I’m in the fx section of a music store I happen to stumble upon, or in a well-equipped studio.

Finally, do you have a tip for beginning musicians?
Well, being a musician that has been growing up with the band I’m still playing in, I must say that the clichès of “believing in yourself” and “never giving up” are actually good mantras to live by. We’ve been slowly building as a band and musicians for almost 20 years now, and having patience, being willing to invest time and money, and also not expecting too much too soon, have been key elements in how we got to where we are today. 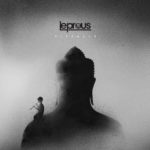 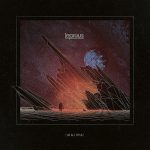 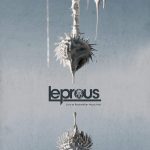 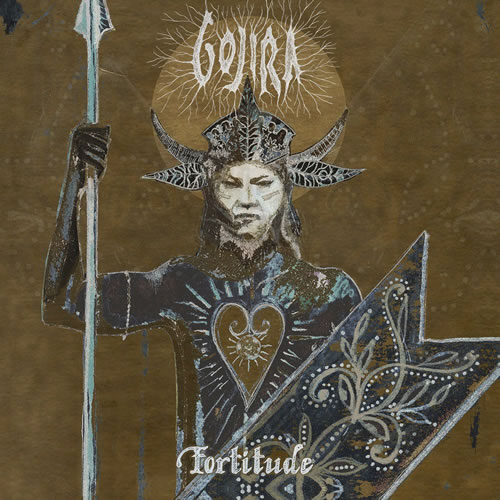 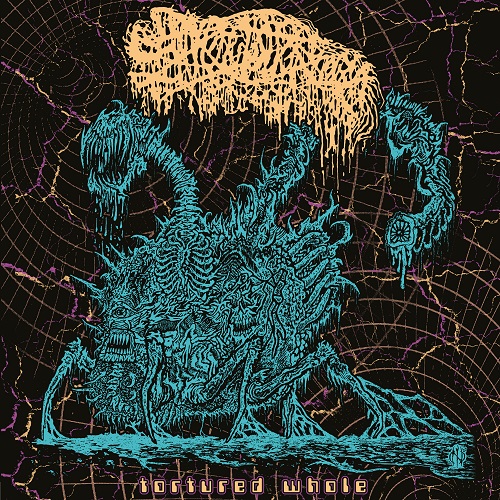 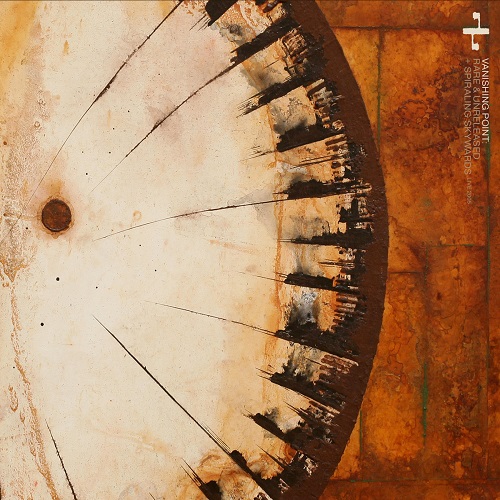 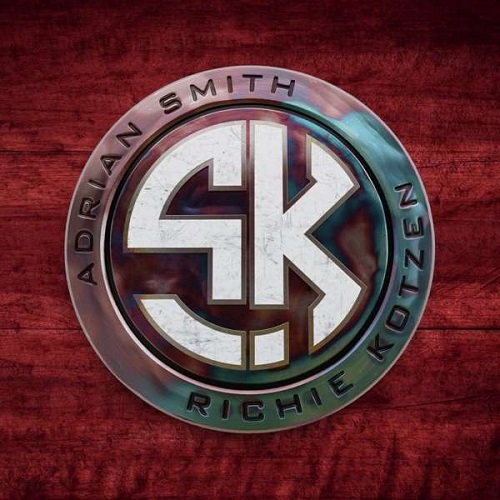 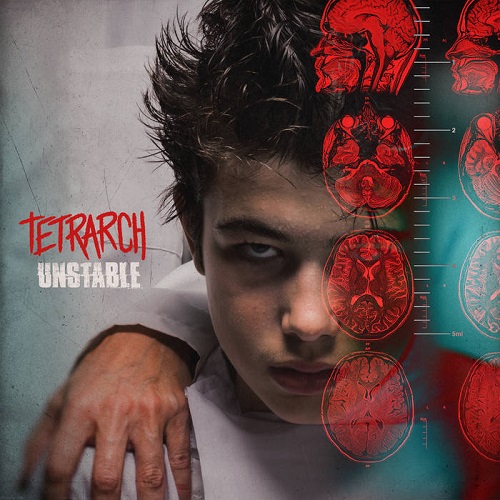 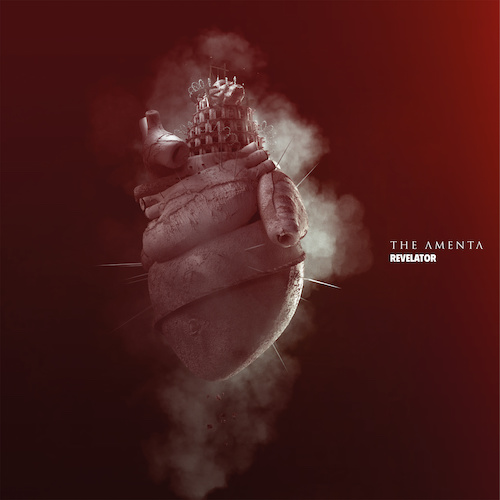 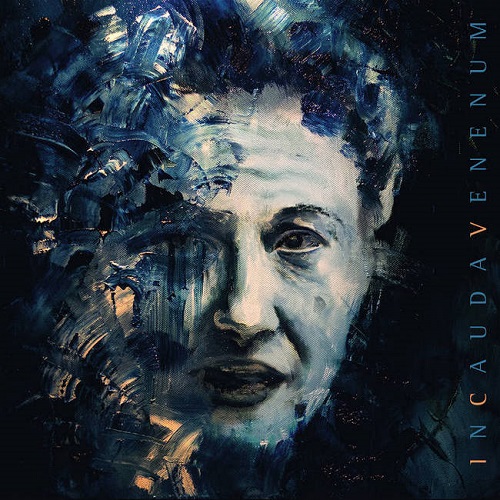 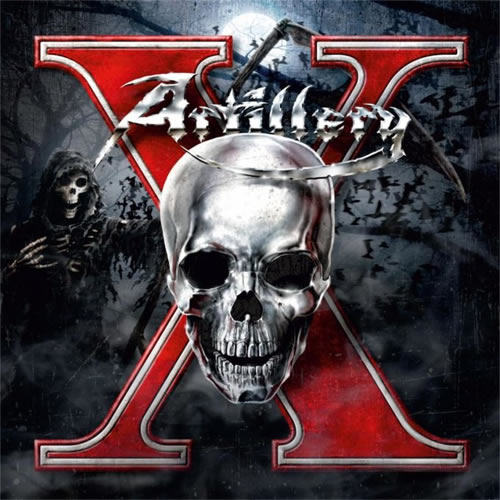 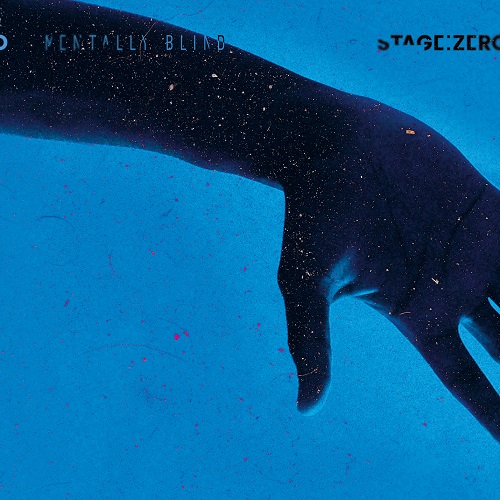 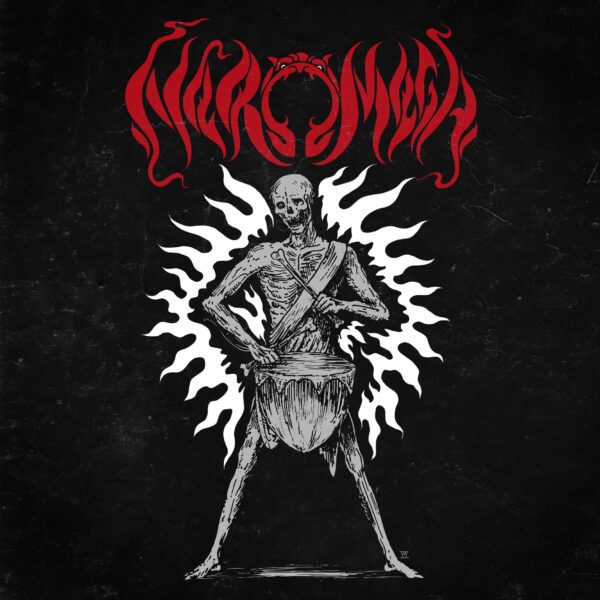 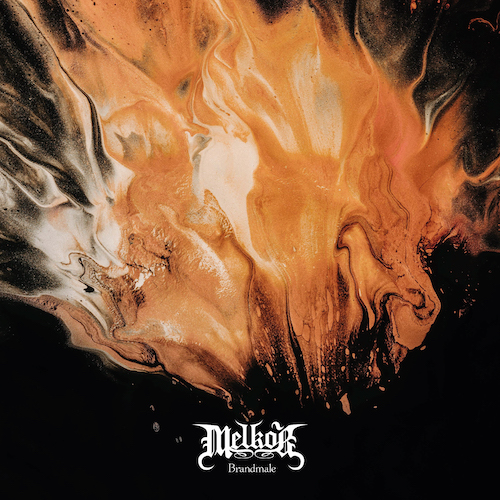 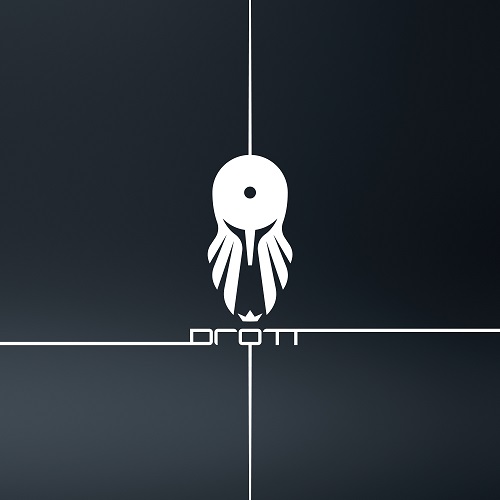 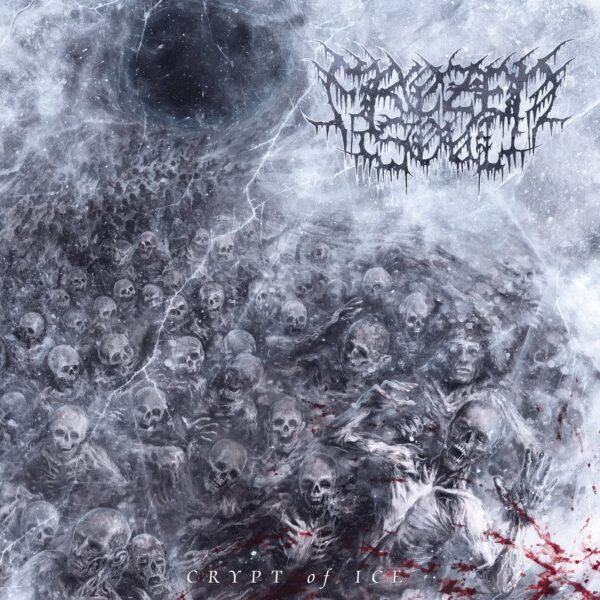 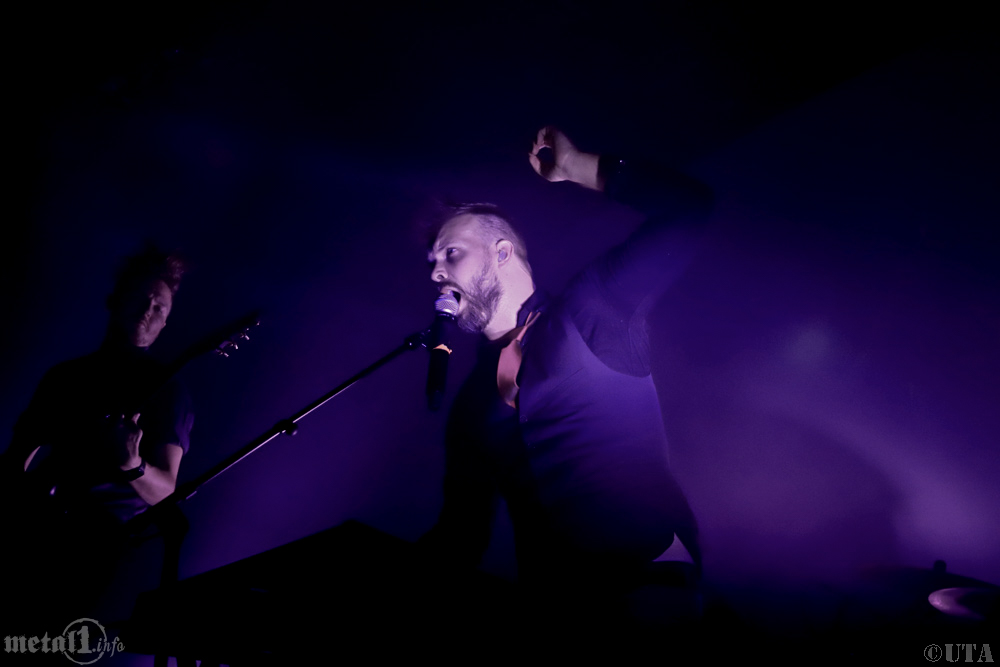