On „Fata Morgana“ MARIANAS REST are dealing with the dark abysses of human existence as well as with the late realization of own mistakes. With this album, the finnish band completes a cycle that they started with their debut album „Horror Vacui“. Drummer Niko Lindman and guitarist Nico Mänttäri talked to us about the lyrical concept, the pandemic as inspiration and the dark sides of life. 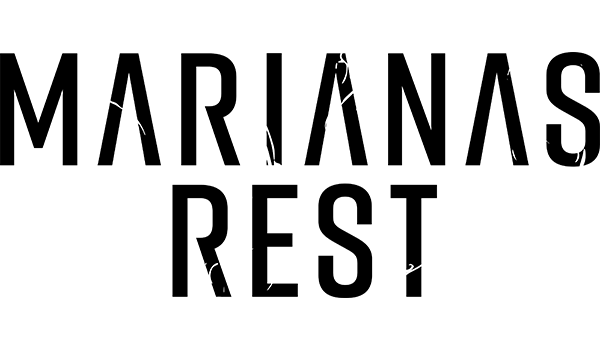 Maybe you can introduce yourself a little bit for some of our readers, who maybe haven’t heard of you yet?
Niko L.: When it comes to our art, it’s all about the mood and emotions we want to deliver. If we want to put it in a box I think the label would say melodic doom/death metal. Still, one can find many different influences here and there. 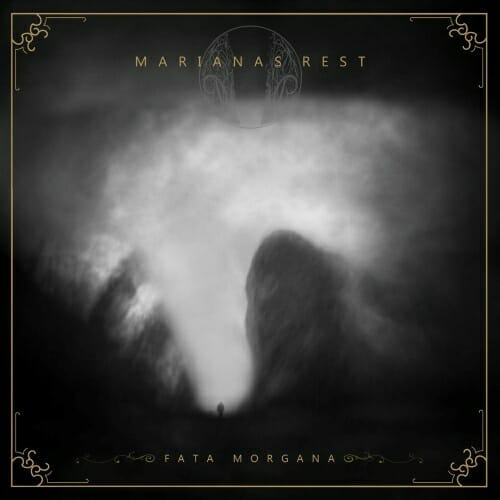 You’ve just released your new record “Fata Morgana”. How was the feedback of fans and press so far?
Nico M.: It has been overwhelmingly good. There is a time after every album release when you deliver the songs to the label and they are out of your hands, you are scared and worried about how people react to it. We felt that the album was solid, but still it was nerve racking to wait for the first reviews to drop. I’m glad people seem to like it.

How long have you worked on the new record and how can we imagine the way you are working on the music?
Niko L.: We started composing first demos in fall 2019 and the songs were ready for the studio about six months later. We had the latest masters somewhere june/july 2020. In our camp everyone has their own input to the songs and we cook the audio together as a group. When the demos are in some sort of playable form and the album is starting to get some flesh on the bones we used to have this “production camp” with our producer. After those sessions we hammer the album ready for the studio.
Nico M.: Like Niko said, the writing is definitely a group effort. I like the fact that we still write most of the stuff jamming as a band rather than sitting at our home studios and figuring out the songs by ourselves. I think the songs get a more lively feeling that way. At least in our case.

Who is in charge of writing the lyrics?
Niko L.: We all give our effort, but Jaakko is our mastermind in this. 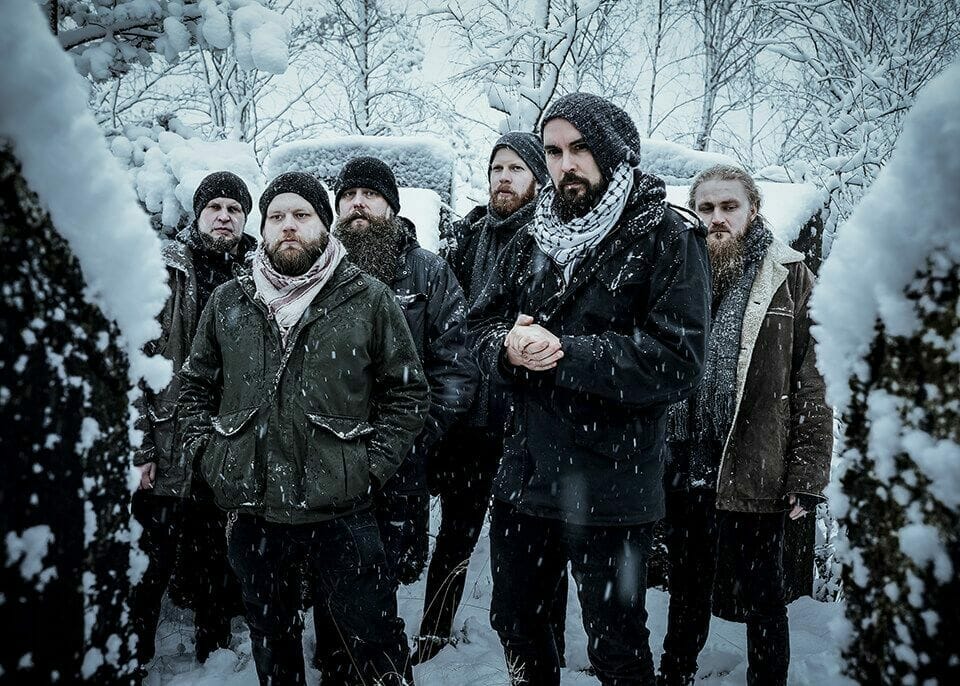 Speaking about the lyrics: Is there a concept, which connects the songs on “Fata Morgana”?
Niko L.: The lyrical concept is about isolating. Our protagonist took a long journey to the end of the world while wondering why he/she/human beings in general act like we do and why it’s hard to see our errors and wrong choices at the particular  moment. Along the way the narrator tries to gather the pieces together, pondering the decisions made. Eventually, we come into the crossroads where we have to choose whether it is possible or not to reach the end and start something new.

Is the new album maybe following a concept of older releases as well?
Niko L.: Yes. Fata Morgana ends up the storyline that started on our debut Horror Vacui, which was about drifting off the rails, so to speak. Followed by Ruins, where the main character collapsed mentally. Fata Morgana is a conclusion where the narrator is trying to look back, this moment and maybe future.

Do you have a favorite song on “Fata Morgana”?
Niko L.: This varies almost daily, but today I would say “South of Vostok”.
Nico M.: Today for me it is the title track, but like Niko said it varies from time to time.

One of my favorite tracks is “The Weight”. Maybe you can tell us a little bit more about it and about the guest you had for the song?
Niko L.: The song is quite long and does not have too many different parts in it, so we approached it by adding more layers in it and started to build its drama that way. Lindsay Schoolcraft on the guest vocals and Timo Virkkala on cello did wonderful work and their input had a huge impact on it.
Nico M.: We tried to have a slightly hypnotic effect in that song with a droning riff that feels like it never ends. And from the first minute or so onwards the song basically circles around that one simple chord progression and we try to have different layers and variations to it. I was a bit worried about how we could keep the song interesting all the way to the end,  but i think eventually it turned out ok. Huge thanks to the guests Lindsay and Timo!

Another great song is “Advent Of Nihilism”. Was it intentional that it became so dark and cold?
Niko L.: I think almost all of our songs have such undertone, but I see your point. We like to let the songs evolve as they want and I think when the black-metallish leading tremolo riff was invented we put some extra satan flavour in it and here we are. No regrets.
Nico M.: Every album needs that one song that is just pure bust of evil. After the first riff we just knew that we couldn’t sprinkle any happy dust on this song. It needed to be dark from the beginning to the end.

The last song on the record is “South Of Vostok”. Maybe you can tell us why you have chosen Vostok? Because Vostok seems to be a very specific location for a song.
Niko L.: It is, but more importantly it appears as a metaphor. Research station named Vostok is located in Antarctica, where nature is as hostile as it can get. Under a ton of ice there is a lake, where there is still life if we look closely enough. 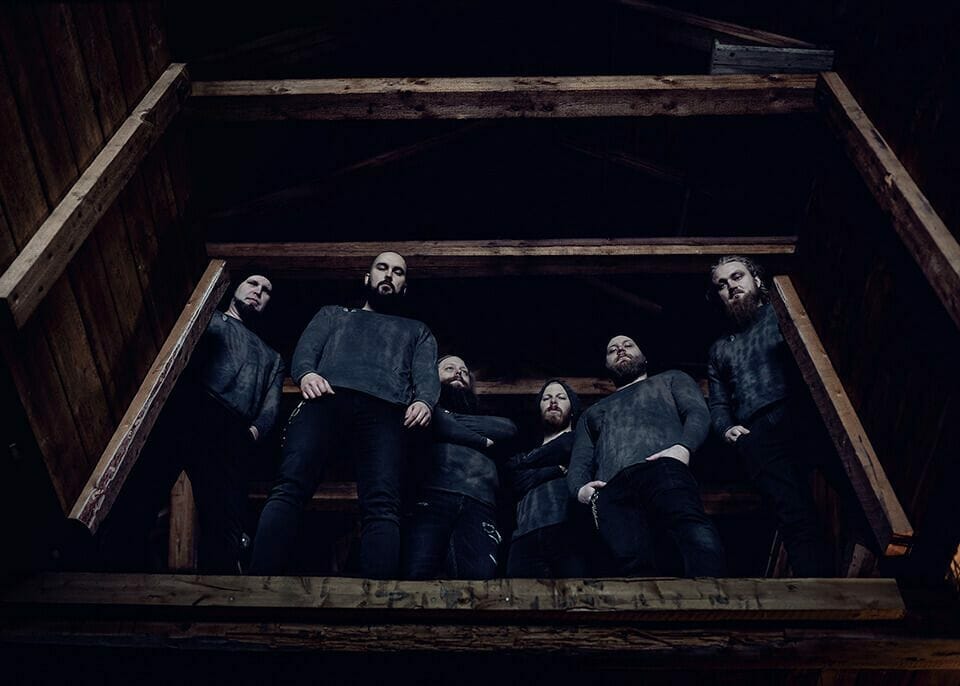 Let’s change the subject a little bit. In most countries live-shows aren’t possible at the moment. Do you have any plans to do a kind of stream-show?
Niko L.: We have discussed that option as well. We already did this pre-recorded “Cabin Sessions” for Napalms Youtube channel and it turned out pretty cool. Ideas for live stream have been made, but before we do one, we’d like to approach that with our own angle.
Nico M.: I think in our case the big thing is to try and get the atmospheres transmitted through the stream show. It has to be all or nothing, no compromises. But like said, ideas are brewing.

How are you dealing with the pandemic as band and also in your personal life?
Niko L.: The situation in Finland has been relatively ok and we all have dodged the virus. Also we´ve been able to work normally in our day jobs. Bandwise this thing sucks of course, since we have been forced to cancel or postpone live shows. In the meantime we have kept ourselves busy and there are dozens of things we still can do e.g. different video productions and short clips, interviews, new demos and proper future plans/scenarios etc., thanks to Napalm. We are ready to put our world domination mode on when this pandemic blows away.
Nico M.: Luckily we have all stayed healthy and sane throughout this werd time period. For now at least. One good thing has also been that we have been able to rehearse and get together as a band somewhat normally. That has helped us to keep the wheels in motion. Let’s just hope the pandemic finally blows over soon.

Would you say that these times can be inspirational in some ways, when you are making music? Especially when your music is dealing with the dark sides of life?
Niko L.: Maybe. Most of our ideas pop up from our everyday gray, but perhaps it has at least some subconscious impact. I still wouldn’t say that it’s in the center of our inspiration.
Nico M.: I think the music is a way to deal with a lot of the crap that we go through in our everyday lives. It helps to deal with the inner dark side. For that reason I would be surprised if the pandemic didn’t affect some of the music that is written during or after these times.

Are you maybe already working on new stuff?
Niko L.: The first brushstrokes have made yes :)

Last but not least, let’s talk about some other stuff. Do you have any books or movies you can recommend at the moment?
Niko L.: I like to read books with a quite large variety when it comes to themes and genres. Like with the music, a good book is a good book. I can recommend my last reads David Attenboroughs “A Life on Our Planet” and Tim Marshalls “Prisoners of Geography”.
Nico M.: As a guy who is always behind in the game I recently watched the Joker -movie and I was surprised at how good it was. Especially because it is not a movie I would normally be that interested about.

What about music? Which artists/bands are you following at the moment? Maybe also aside from the metal-genre?
Niko L.: Recently I’ve been listening to the newest stuff from Blue Öyster Cult and Lana Del Rey.
Nico M.: Recently I have listened to the new Dark Tranquillity a lot. And, even though not a current band, Roxette has been on heavy rotation lately.

Ok. That was my last question. Thank you for taking the time to answer our questions. The last words belong to you.
Niko L.: This was our pleasure! Hope to see you later and have a chat in person when the world finally opens.
Nico M.: Thank you! Stay healthy and stay strong! This will blow over and when it does, we will come to see all of you. Can’t wait!